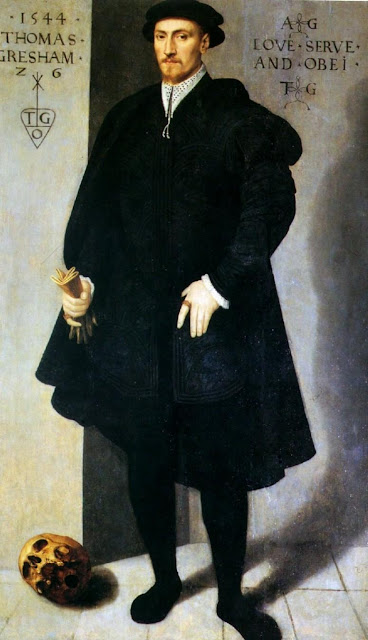 Unsigned portrait in oils dated 1544 of Sir Thomas Gresham, in the collection of the Mercers’ Company of the City of London. 1544 portrait of Sir Thomas Gresham, aged 26 as inscribed, displaying his merchant’s mark (left). Apparently commemorating his 1544 marriage to Anne Ferneley, with the couple’s initials „AG” and „TG” framing the marriage vows Love Serve and Obei (right). The human skull denotes Vanitas.
___
Urząd Burmistrza City, Mayor (of the City) of London, został ustanowiony w 1189 r. Pierwszym był Henry Fitz-Ailwin de Londonestone. Od 1215 Burmistrz City nie jest mianowany przez władcę, ale jest wybierany. Od 1354 burmistrz nosi tytuł Lord Mayor (of the City) of London. Lord Burmistrz jest wybierany na jeden rok w Common Hall, w skład której wchodzą członkowie wszystkich gildii City.
Pierwszą i najważniejszą gildią City jest Czcigodna Kompania Handlowa (Worshipful Company of Mercers) ustanowiona oficjalnie w 1394. The Company’s aim was to act as a trade association for general merchants, and especially for exporters of wool and importers of velvet, silk and other luxurious fabrics (mercers). By the 16th century many members of the Company had lost any connection with the original trade.
Do początku XVI wieku, to jest do rewolucji protestanckiej, handel zagraniczny City był „obsługiwany” niemal całkowicie przez Włochów**. Jednym z prowodyrów zmiany tej sytuacji, był członek założyciel Kompanii Moskiewskiej, John Gresham z normandzkiego rodu, stryj Tomasza.
In 1519, he and his older brother William Gresham were both elected to the livery of the company. Later, John Gresham was four times Master of the Mercers’ Company. Gresham was in partnership with his brother, Richard Gresham, in the export of textiles and in importing grain from Germany and wine from Bordeaux. He also traded in silks and spices from the Ottoman Empire and imported timber and skins from the Baltic… Gresham was Sheriff of London and Middlesex in 1537–1538 and at the same time was knighted… In 1539, the king granted Gresham the manor of Sanderstead in Surrey, following the dissolution of the monasteries…
W 1547 John a w 1537 Richard byli wybrani Lordem Mayorem. Ryszard specjalizował się w handlu z Niderlandami, no i był zawziętym przyjacielem Lorda Kanclerza kardynała Wosley’a. Syn Ryszarda, Tomasz (patrz wyżej) doprowadził sprawę niezależności Londynu do końca – w 1565 założył w Londynie Królewską Giełdę, Royal Exchange:
In 1543 the Mercers’ Company admitted the 24-year-old Gresham as a liveryman, and later that year he left England for the Low Countries, where, either on his own account or that of his father or uncle, he both carried on business as a merchant whilst acting in various matters as agent for King Henry VIII. In 1544 he married Anne Ferneley, widow of the London merchant Sir William Read, but maintained residence principally in the Low Countries, basing his headquarters at Antwerp in present-day Belgium (then the Spanish Netherlands), where he became renowned for his adept market-play. When in 1551 the mismanagement of Sir William Dansell, King’s Merchant to the Low Countries, had caused the English Government much financial embarrassment, the authorities called Gresham for advice, thereafter following his proposals. Gresham advocated the adoption of various methods – highly ingenious, but quite arbitrary and unfair — for raising the value of the pound sterling on the bourse of Antwerp which proved so successful that in just a few years King Edward VI had discharged almost all of his debts. The Government sought Gresham’s advice in all their money difficulties, and also frequently employed him in various diplomatic missions. He had no stated salary, but in reward of his services received from King Edward various grants of lands, the annual value of which at that time amounted ultimately to about 400 pounds a year.
On the accession of Queen Mary in 1553 Gresham fell out of favour at Court for a short time with Alderman William Dauntsey displacing him. But Dauntsey’s financial operations proved unsuccessful and Gresham was soon re-instated; and as he professed his zealous desire to serve the Queen, and manifested great adroitness both in negotiating loans and in smuggling money, arms and foreign goods, not only were his services retained throughout her reign (1553–1558), but besides his salary of twenty shillings per diem he received grants of church lands to the yearly value of 200 pounds. Under Queen Elizabeth’s reign (1558–1603), besides continuing in his post as financial agent of the Crown, Gresham acted as Ambassador Plenipotentiary to the Court of Duchess Margaret of Parma, Governor of the Netherlands, and was appointed a Knight Bachelor in 1559 prior to his departure. The unsettled times preceding the Dutch revolt compelled him to leave Antwerp on 10 March 1567; but, though he spent the remainder of his life in London, he continued his business as merchant and government financial agent in much the same way as he had always done. His enterprises made him one of the richest men of his generation in England.
Moneylenders and financiers developed a large business lending money all over Europe including the English government in 1544–1574. London bankers were too small to operate on that scale, and Antwerp had a highly efficient bourse that itself attracted rich bankers from around Europe. After the 1570s, the city’s banking business declined: England ended its borrowing in Antwerp in 1574.
Zwieńczenie operacji/rewolucji nastąpiło sto lat później: The London Stock Exchange started operating and listing shares and bonds in 1688.
PS. Taka ciekawostka – córka Tomasza została szwagierką „teoretyka terroru” Francisa Bacona: boson.szkolanawigatorow.pl/naukowy-terror-czyli-koniec-wesoej-anglii
__
**) boson.szkolanawigatorow.pl/republika-wenecka-jej-arsena-i-ci-zaskakujacy-anglicy
pobrano z https://bosonweb.wordpress.com/2019/02/17/greshamowie-czyli-city-idzie-na-calosc/